Ordinary adjectives have a positive, comparative and superlative form

Comparatives With No Positives

Positives in this category, where they appear, are substantives. The īnferī are the gods the underworld, extrēmī are foreigners and Postumus is a common surname.

I thought I should share two resources dear to my study of Latin. These are twin tools I use when searching for English words with Latin roots, or Latin words with English derivatives.

Certainly, I profit immensely from becoming tongue-tied between the two languages—if that makes sense.

There’s some danger here. Certain common Latin words, like prōspiciō, have comparatively rare English derivatives like prospicient. Naturally, after a few weeks of reading Cicero, prospicient feels like an ordinary word because you encounter its root relative so often in the text. It’s not, and I get looks for letting it loose in casual conversation. Beware.

For finding English derivatives, I use this Wikipedia page. 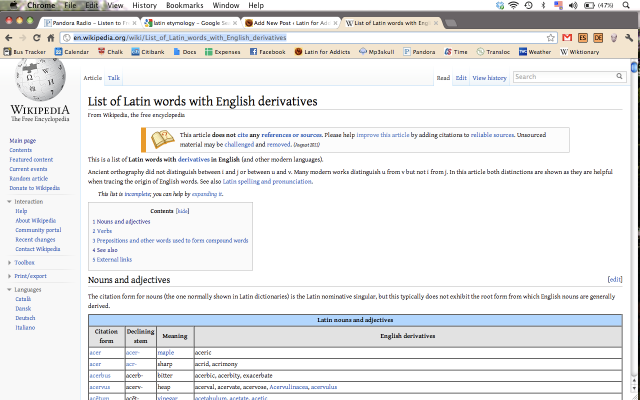 Now, with a simple [ command/control+f ], it’s easy to search for either Latin roots or English derivatives.

However, for finding Latin roots of English words, I prefer this handy etymology dictionary, which reveals the precise history of many English words.

Neither of these tools is nearly comprehensive—so if there’s a particular world you’re interested in, a simple Google search might work. That said, if the words you’re after aren’t on either of these sites, (in my experience) they probably aren’t on Google, either.

If readers have any additional sites to suggest, I’m all ears!

Origin of The Expressions

prīdiē is a locative form of the fifth declension prīdiēs (viz. prae + diēs) and appears as independent expression of time

prīdiē should be translated the day before or yesterday

postrīdiē should be translated the day after or tomorrow

These expressions may be adverbial or substantive

Where adverbial, each term expresses time relative to spoken sentence itself

Where substantive with a genitive or accusative case, each term expresses time relative to some event, the day before or the day after the genitive counterpart

Finally, as a substantive they may be coupled with quam (prīdiē…quam), where each term expresses time relative to the quam clause

[take care today so that you won’t regret what happens tomorrow] (Plautus, Stichus, 1.2.65)

All members of both classes are first/second declension adjectives

In addition to an accusative direct object, some verbs take either (i) a predicate accusative or (ii) a second object

The predicate accusative is not an apposition, because it is not contained within a separate clause

Many of these verbs have alternative constructions featuring one accusative object, and one ablative of agent

When converted to passive form, double accusative constructions will often place one accusative in the nominative, leaving the other in the accusative

“The accusative of secondary object is used…to denote something more remotely affected by the action of the verb” (AG, 394)

Here, there is a clear hierarchy between primary and secondary accusative objects

The secondary object is rare, an appears with only a handful of verbal compounds of dūco, iāciō, and portō, especially compounds with the preposition trāns

[a motto for pathologists]

“Personal pronouns of the third person—he, she, it—are wanting in Latin” (AG 142)

Subject pronouns are rare, except where emphasis is needed

Often, personal pronouns cluster together in a sentence

Nōs will often appear for ego (the ‘royal we’), but vōs will never appear for tū

Famous Phrase: tū fuī egō eris (I was you; you will be me) [written on gravestones]

“Verbs of permitting take either the subjunctive or the infinitive.” (AG 563c)

Where the subjunctive appears, it accompanies a substantive clause of purpose, led on by ut or nē.

The impersonal licet may also mean allow or permit, and may also take an infinite, or initiate a subjunctive purpose clause

(once each year, it is permitted to go crazy)

Ergā is a preposition; it takes the accusative case and may be translated toward or for.

Along with in is forms an accusative of inclination; in this use, both prepositions have the same meaning.

The sense of ergā is always conceptual; ‘toward’ describes ‘regard for’ or ‘with respect to,’ and not physical movement

Intersum and rēfero appear with many meanings, both personal and impersonal

They decline irregularly, in the pattern of sum and ferō, i.o.

As a personal verb, intersum may be translated be apart, differ, be among, be between, or attend to

As impersonal verbs, interest and rēfert may both be translated as be of interest or matter or be advantageous

“The subject of the verb is a neuter pronoun or a substantive clause” (AG, 355)

The person affective is given in the genitive

“The degree of interest is expressed by a genitive of value, an adverb, or an adverbial accusative” (AG, 355n2)

The person affected is given with ad or the dative

Summary of Use and Defection

Queō and nequeō (viz. ne + queō) are defective verbs and should be translated I can and I cannot, i.o.

Many forms are defective—that is, they appear in no extant Latin text