I’d like to offer the argument that Wiktionary is the top Latin dictionary available online. I’m sure I’ll meet with the same skeptics who consider Wikipedia an amalgam of amateurs. Let’s fight about it. Here’s my argument.

Wiktionary is superior to two specific alternatives: Whitaker’s Words and Lewis and Short (under Perseus).

Wiktionary is easier to navigate than Perseus or Whitaker. Perseus is notoriously slow, and its entries aren’t incredibly readable. Whitaker is more straightforward, yet demands that I open two windows, which seems unnecessary. There’s no reason a search bar can’t also appear on the results page for further searches.

Wiktionary beats these two because it’s fast and offers a friendly interface. 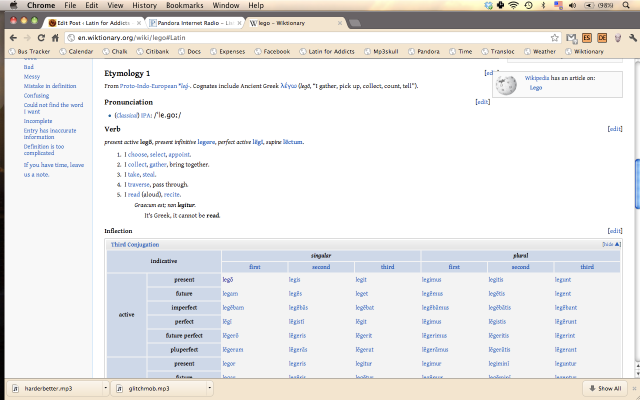 Like Lewis and Short, it’s pretty good about idiomatic meanings, and it’s OK (just OK) with specifying special case usage and constructions. It’s also often great on etymologies–even pre-Latin etymologies. Admittedly, Lewis and Short are better at both of these features, which is why–I imagine–the link to their entry (under Perseus) is often included at the bottom of each Wiktionary entry. There’s really no need to start with Perseus if you don’t have to.

Whitaker’s Words has a lot of mysterious notation explaining the way in which it parses words (none of which is explained on the site, so far as I can tell). As soon as the site completes its project on era/period frequency, it might be a much better site.

Wiktionary also bests both of them by offering you conjugations and declensions (we’re talking full parses) without asking. They’re just right there on the page. Even better, it’s minimized to begin with, so if you’re a purist and you want to guess the form without the parse, or your just want to scroll down the page a little faster, you won’t encounter opposition.

Wiktionary is also the only option to make macrons available everywhere. (If you haven’t noticed, I’m a fan of the macron.) 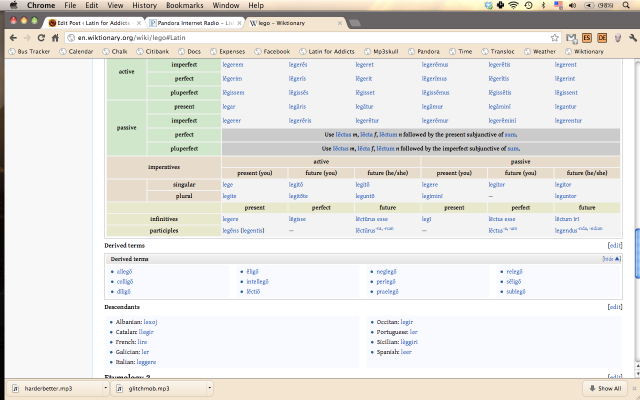 Of course, if I type ‘lego’ into the search bar, the page includes both legō (to read, etc.) and lēgō (to dispatch), with all the same perks.

Exceptions for using Lewis and Short: (a) where Wiktionary fails to find an idiom or rare usage and (b) where I need to know era/period frequency.

Exception for using Whitaker’s Words: where I have the English and I want the Latin. I haven’t found a better English-to-Latin Thesaurus just yet. Perseus performs this function (in a round about way, and at a snail’s pace). Any recommendations?

Maybe my argument didn’t convince you. Maybe you really like the ‘OLD’ way of doing things. I hate dragging myself to a bookshelf, and I can’t carry that thing to campus. Or, maybe you’re really excited about this: 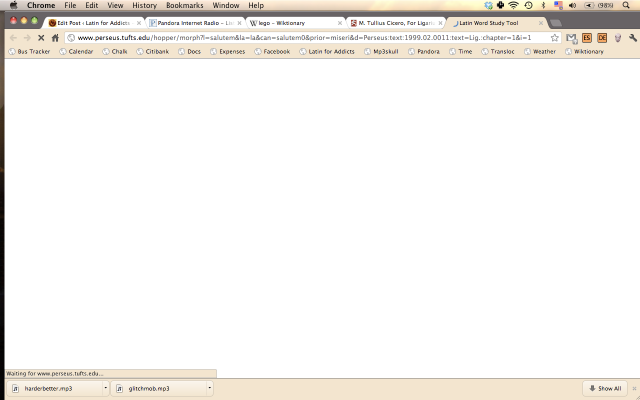