As a (fourth declension masculine) noun, ūsus can adopt a variety of closely-related but powerfully particular meanings:

1. Ūsus + genitive typically refers to the use, exercise or enjoyment of something.

2. On its own, ūsus can either refer to ‘exercise’ or ‘wear and tear’

3. It can also reference a ‘habit’ or social ‘custom’

Lewis and Short have a different take on the masculine/feminine division of diēs. They claim that diēs is properly masculine, but appears in poetry (metrī gratiā) as a feminine noun to mean ‘day’ in prose to mean ‘time’ or ‘date.’

They pull a number of examples from Ennius, Ovid, Horace and Vergil to support this, but then also lay bare that Julius Caesar (feminine) and Sallust (masculine) use the two genders of diēs for the same phrases. What are your thoughts on this?

The phrase in diēs is generally translated ‘every day.’ Cf. cotidiē and in diem, which mean roughly the same.

You would think, given the vast tribe of verbal compounds with inter- as a prefix, that a few species of intrā-compounds would also inhabit that wood of the Latin dictionary. In fact, they are highly endangered, perhaps even extinct. Here are a few compound adjectives and nouns that I discovered; the verbs were nowhere to be found.

Patronymics are generally Greek-derived Latin nouns with special endings, appearing frequently in epic poetry and rarely elsewhere. They may be masculine or feminine, but always one or the other, depending on the specific ending:

Ambō is sometimes decline to match its respective noun, like a fully-functional adjective, but otherwise remains fixed as ambō

Effectively, there is no rule. Both A&G and L&S present freeform variation between the two options.

Here are a few notes on the Latin for day—diēs.

1. Diēs is a fifth-declension noun. 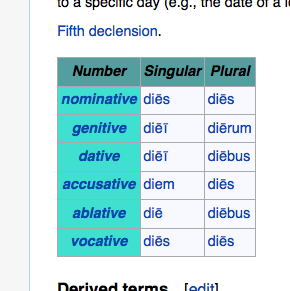 2. Diēs is typically masculine (like most fifth declension nouns), but is occasionally feminine, especially in fixed phrases and general reference to time or dates.

3. Diēs is one of only two nouns in the fifth declension that is entirely declined. Rēs is  the other such noun—all other fifth declension nouns are wanting in the plural (or at least the plural genitive, dative and ablative) in extant Latin literature.

A number of adjectival endings denote what Allen and Greenough refer to as a ‘gentile’ relationship—demonstrating ‘relation to’ or ‘belonging to’ the corresponding class of nouns. One of these is -ānus, -a, -um.

Some of these derived adjectives have furthermore been transformed to new nouns.

This is just a quick reminder (of what I covered briefly in March 2012) that intrā gives rise to one of the few comparative / superlative adjectival pairs that is not derived from an adjective.

“The forms in -trā and -terus were originally comparative (cf. alter), so that the comparatives in -terior are double comparatives.” (my emphasis)

The same suffixes—ārius, tōrius, and sōrius—that formed a number of adjectives in this post can also be put to use as nouns with a regular range of meanings. This meaning is often restricted to the gender of the noun formed. Again, these denote a kind of belonging.

-ārium (n.) thing (often a place) associated with a field

The adjectival suffixes -ārius, -tōrius, and -sōrius denote belonging to a group qualified by the implied content of the correspond root. Effectively, these adjectives are formed by the addition to -ius to the adjectival root -āris or the nominal root -or. Let’s build a few examples.

A few things to notice about this pattern: (i) the original base of the adjective can be just about anything—noun, adjective, verb, adverb—but the penultimate word is always a noun or an adjective. That said, (ii) the penultimate noun or adjective is not always extant in Latin; note the [brackets]. Finally, note that (iii) this set of adjectives is often theoretical—rēs bellatōriae (matters of warriors)and rēs extrāriae (matters of foreigners) probably cover half the total appearances of those two adjectives.