Yeah, I made that genitive up, but only to describe a real phenomenon in Latin! Some adjectives of likeness, nearness, and belonging that normally take the dative will occasionally take a possessive genitive. This transition is especially common where the adjective approaches the force of a noun.

Here’s the full list of adjectives that perform this function—

Similis with the genitive is especially common with personal pronouns (meī, tuī, suī) and within the fixed phrase vērī similis (probable).

Like A&G, I would like to conclude my series on i-stems with a short assessment of the basic rules and variations associated with the i-stem class.

A&G paint a picture of cultural amnesia regarding Roman relations with the i-stem. As I have shown in previous posts, in all but the genitive plural (ium), and the neuter accusative/nominative plural (ia), the unique i-stem endings are rare or optional. (cf. the status of English ‘who/m’).

There are a few miscellaneous rules associated with the i-stem class that I want to make available, based on crumbs and morsels from A&Gs remaining material.

1. The nominative plural ending -īs (for masc/fem nouns) is possible, but rare, and much rarer than the accusative plural -īs for the same set of nouns.

2. Remember how trusty that plural genitive -ium is supposed to be? It’s supposed to be there for any i-stem noun, whether pure or mixed; masculine, feminine or neuter. Well, not quite…

The following nouns always display -um in place of –ium.

The following nouns sometimes or rarely display -um in place of -ium.

You’ll notice that many of these are mixed i-stems, and their unfaithful genitive plural is one of the features that makes them mixed.

We see that -im and -ī tend to be common in the same words. That is, where -im is of frequency, so too is -ī.

1. with secūrī
2. with the adjectives (nominative -is) where these are used as nouns:

(As adjectives proper, they would be aequāle, annāle, etc. in the ablative.)

2. With the following adjectives (nominative -is or -ens) where they are used as substantives:

In my opinion, A&G make too big a fuss over mixed i-stems, which are essentially a broad class of nouns that usually feature a genitive plural in -ium and might feature an accusative plural in -īs, but are otherwise regular third declension nouns.

Here are five of their six morphological classes, along with all the examples they offer. (I’m excluding 71.4 because it’s ridiculous that they’ve placed it there at all):

2. All monosyllable nominatives in -s or -x preceded by a consonant.

3. On the following monosyllable nominatives in -s or –x preceded by a vowel.

4. Polysyllable nominatives in -ns or -rs.

This does not apply to all present active participles!

While we’re on the topic of i-stems (the dentālia, in particular), here are comparative diagrams of the English plot and Latin aratrum.

I couldn’t find two pictures that corresponding exactly, but using these two along with Lewis and Short we can offer the following definitions:

(Think of it as the bow of a ship. If you need it, here’s the distinction between the prow and the bow.)

I’m sure this description is inadequate, and a Youtube video with a live plow would be so much more helpful. I failed to find such a video, but if anyone has seen one, please leave the link in the comments!

So, unfortunately, I stated earlier that the neuter i-stem class is entirely regular. In fact, a footnote in A&G reveals about ten exceptions.

These nouns are almost regular, except that with consonantal stems –al and –ar they also add the ending -e to the nominative and accusative singular. Note that because of this ending, the -ā- is long in all cases.

Where the singular is uncommon or does not exist, I have used the plural.

In this post, I want to expand on a footnote in A&G, which lists a whole herd of neuter i-stems, but then offers them no definitions.

(if given in the plural, singular is rare or non-existent)

In this section, we’ll introduce the i-stem as a morphological class, and discuss the declension of ‘regular’ masculine and feminine i-stem nouns.

First off, all i-stems are either pure or mixed.

sitis, sitis (f.) thirst (declined only in the singular, for sensible reasons)

A few unique features to note:

As you can see, there aren’t many markers (just one) that guarantee any given noun is an i-stem noun. In fact, it would be possible to decline ignis in a way such that only it’s nominative singular and genitive plural gave any hint of the i-stem status.

With four nouns in particular (imber, rain; linter, skiff; ūter, wineskin; venter, belly) this problem is even more evidence because here even the nominative is lost as a distinctive feature. The only morphological form that demonstrates imber‘s i-stem status is its genitive plural imbrium.

The basic neuter i-stem declension takes the stem (mari-) and converts the final i- to an e- in the nominative and accusative singular. 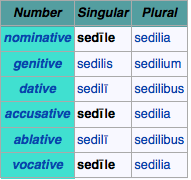 In this basic output, the neuter i-stem is far more regular than its masculine and feminine counterparts:

These are all regularized and there are no exceptions…except for the majority of nouns in the neuter i-stem declension, which don’t decline like this at all. Most neuter i-stem nouns have a consonantal base in -al or -ar, which is retained in all morphological forms. This causes only one change: these forms are animal, animalis, and not *animale, animalis. Everything else remains the same.

There’s one feature that Wiktionary fails to capture in this chat. The -a- at the end of the stem is short in the nominative and accusative singular, but along everywhere else (see my lexical entry above). This is true of all i-stem nouns ending in –al or -ar.

There you have it! The neuter i-stem declension. It’s fairly regular; it merely entails a large quantity of regular rules.

Latin for Addicts
Create a free website or blog at WordPress.com.